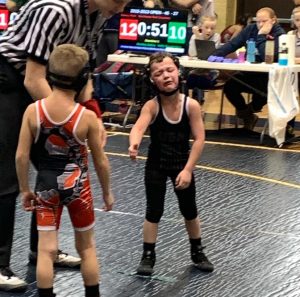 An illustration of good sportsmanship came across Facebook the other day. It talked about the way to handle losing in an athletic event.

Too often the focus of our society is winning [in sports] and then trying to carry the attitude into everything else. Sadly, it doesn’t work that way. This constant desire to win is mostly hilarious to me. After class, I’ve even had younglings tell me that they needed to race Mom and the other younglings home. I guess that some need to win even when the others don’t know that they’re in a competition.

This last weekend was the Minnesota State Boy’s High School Hockey tournament. This is something big here. The attendance for the Class AA Championship game (between the 3rd and 5th ranked teams) was 19,950. This 2OT game had everything that a sporting event should have in a game! One commentator even stated that, after efforts like this, no player on either side should hang their head. Well, good thought, but many on the losing side were in tears. The emotion takes nothing away from the fact that they had accomplished throughout the season. Once the adrenaline drains and the noise stops, it will have been just another game. Maybe the last for some but there will still be good memories.

This took me back to remember a scene from the movie Angus (posted below). It is something that doesn’t strike you until you think about it. Superman doesn’t need to be brave. There’s very little that can actually harm him (and even less of it on Earth). All of the capabilities that he has allow him to go into situations fearlessly…well, unless a gun is thrown at him. We are not that fortunate. Our lessons learned through childhood and academics combine to create the person we are. Those who follow the axiom “get knocked down seven times, get up eight” understand that there may have been some emotional response while down but it is quickly shaken off in order to rise again.

I’m wondering how much age and ego come into play regarding a loss. Younglings who are still developing in all areas may have a more emotional response that can appear as being a poor sport. I also think that those with big egos take everything personally and forget that it is a game. An example is the high school star athlete still talking about those glory days.

A story was related about a WWI battle where the soldiers had to cross a river with several machine placements on the other side. The first group attempted to boat across and were destroyed by the machine guns. An officer down river stated that they were the bravest men he’d ever seen. The officer next to him pointed at the next group getting into boats and stated no those are the bravest I’ve ever seen. How do you work at being brave? Martial arts tournaments are good. Doing martial arts demonstrations are good. Rank promotion tests are good. All of these have the commonality of being stressful. This becomes where you can add work presentations and academic presentations among many other. Bravery comes from performing under stress.

As you read and enjoy the posts on this site, please consider "sharing" them! The "likes" help generate additional readership but "sharing" will help even more! Thank you for your assistance! If you have questions, please feel free to contact me!
Related Articles
The “Eye Trick”
Presentation IS important!
Control the First Move